A price to pay-Richa Bhattarai

A price to pay

Given the growing number of Nepali workers who continue to migrate to strange lands for better employment opportunities every year, the lives and concerns of this demographic have naturally come to take up considerable space in contemporary Nepali literature. And Uma Subedi’s Toda occupies a special place among these, unveiling as it does the perspective of female migrant workers—their miseries, for the most part—in a very knowledgeable and authentic manner. Drawing parallels between Nepal’s civil war and Nazi Germany, and then linking these to the modern-day trauma of emigrants, Subedi does an impressive job here of describing succintly the complex web of human relations and emotions that have been at work within these events and experiences. 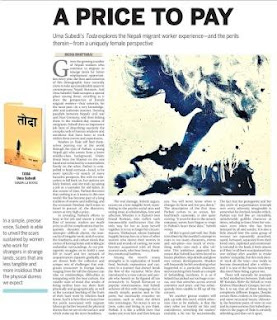 Readers in Toda will find themselves peering out at the world through the eyes of Parbati, a young Nepali girl who comes from a lower middle-class background. Under threat from the Maoists on the one hand and ostracised by a materialistic family on the other, Parbati is compelled to head overseas—Israel, to be more specific—in search of more lucrative prospects. But with no education to fall back on, her options are fairly limited, and she ends up taking a job as a caretaker for old ladies. In due course of time, Parbati discovers that nothing is as it seems in this new world: She has become part of a long tradition of sorrow and suffering, and the economic freedom she’d come to Israel in pursuit of, she discovers, comes at very high a price.
In revealing Parbati’s efforts to keep at her job and ensure a steady flow of income, readers are made privy to all the complications that frequently threaten to curb her attempts—difficult clients, the insecurity of irregular work, and of course, the loneliness and culture shock that comes of leaving home and settling in unfamiliar surroundings. As our protagonist struggles on to build a new life in Israel and her network of acquaintances expands gradually, we are shown both the collective and unique sets of challenges that emigrants encounter in foreign lands, ranging from the toll the distance can take on relationships, difficulties in integrating with the host culture, the volatile state of mind that results of being neither here nor there both physically and geographically, as well as the constant leeching of the fruits of their hard work by relatives back home. And it is here that we learn how the perils associated with migrant labour go further beyond the physical duress that we see on the surface, and which make up the news headlines.
The real damage, Subedi argues, occurs on a less-tangible level; manifesting in the psycho-social area and eating away at relationships, love and affection. Whether it is Parbati’s best friend Roshani, who suffers such innumerable misfortunes that the only way for her to keep herself together is to try to forget her circumstances; Thirkumari, whose husband happily betrays her; or a host of other women who drown their worries in drink and rounds of cursing, we soon become acquainted with all these scarred souls, who bear heavy, thankless emotional burdens.
Among the novel’s many strengths is its exploration of Israeli food, festivals, expressions and customs in a manner that doesn’t break the flow of the narrative. We’re thus introduced to a new culture and people who haven’t so far figured all too extensively in Nepali literature or popular consciousness. And Subedi achieves all this with language that is mostly simple, precise and to the point, but necessarily evocative on occasion, such as when she delves into monologue: “An ocean is not as tame, calm and loving as you think, Parbati. It is like a selfish lover that makes you trust him and then betrays you. You will never know when it changes its form and lets you down.”  The description of the first time Parbati comes to an ocean, her boyfriend’s namesake, is also quite moving. “It must be due to the ocean’s company, waves have begun to erupt in Parbati’s heart these days,” Subedi writes.
All this is good and well, but Toda is let down by the novelist’s attempt to cram in too many characters, events and sub-plots—too much of everything, really—into such a slim volume. This ambitious approach has meant that Subedi has been forced to hasten plotlines, skip details and gloss over certain developments. Readers will frequently be left wondering what happened to a particular character, and scratching their heads at a couple of befuddling incidents. It is as if Subedi has picked out too huge a canvas, one that stretches across several countries and years, and has subsequently been unable to fill up all the corners.
Yet another grouse readers will pick up with this novel, which otherwise tries to be realistic, is that the story relies too heavily on fate and coincidence, stretching the readers’ credulity a bit too far occassionally. The fact that the protagonist and her tiny circle of acquaintances triumph over every adversity imaginable is somewhat far-fetched, besides which, Parbati can feel like an incredibly, unbelievably gullible character at times, refusing to learn from her mistakes even when she has been betrayed by all and sundry. It is also a little absurd how the same group of women are repeatedly assaulted, raped, betrayed, separated from their loved ones, exploited and emotionally tortured in the book; it feels almost as if they’ve all been manipulated into one mishap after another to evoke readers’ sympathy. But this trick doesn’t work all the time—one tends to become desensitised after a while—and it is one of the factors that keep this novel from being a great one.


There will naturally be attempts to find similarities between Toda and BP Koirala’s Hitler Ra Yahudi or even Krishna Dharabasi’s Gestapo, but suffice it to say that all three belong to completely different leagues. Despite certain flaws evident in the plotlines, and some structural issues, ultimately, the feminine point-of-view on war and its repercussions that Subedi provides in the pages of Toda is certainly refreshing and does set it apart.

Posted by umasubedi.blogspot.com at 7:10 AM